The youth ministry report to the 2014 Convention of the Episcopal Diocese of Fort Worth is submitted by the Rev. Amy Haynie. You may download a PDF of this report here.

2014 has been a busy year in youth ministry across the entire Episcopal Church. The Episcopal Youth Event (EYE) was held in Philadelphia at Villanova University July 9-13, drawing more than 1200 youth and adult sponsors. The Episcopal Diocese of Fort Worth was well-represented by two youth from St Martin in the Fields Episcopal Church, Keller, Jacob and Sarah. On arrival at DFW Airport, the dioceses of Northwest Texas and Dallas immediately greeted us as travel companions. 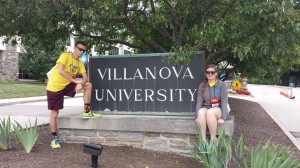 Each day of EYE, there were workshops on Spiritual Formation and Christian Leadership. The workshops were very well attended by the youth and the adults as we all learned new skills to bring back home.

There was also very enthusiastic worship every day with a band that had converted traditional hymns to newer rhythms and styles of music. It was an awesome sight to see that many Episcopalians worshipping with such enthusiasm!

On July 11, the entire EYE group was taken by charter busses into Philadelphia for tours of different Episcopal churches and ministries. We were overwhelmed with the weight of history of the United States and of the Episcopal Church in those spaces. The day ended at the Philadelphia Museum of Modern Art with Philly Cheesesteak sandwiches. The Diocese of Pennsylvania was a wonderful host.

Sarah and Jacob were each very thankful for new friendships forged at EYE. They each expressed how fun it was to be in a place with so many other Episcopalians their age.

Plans for 2015 diocesan youth include a Happening weekend, tentatively planned for April 17-19 at Trinity Episcopal Church in Fort Worth. We are working with the Episcopal Diocese of West Missouri to potentially send a team of Happeners to get us started well again.  This effort is a direct result of the conversations begun at Diocesan Convention 2013.

The youth ministers in the diocese meet periodically in person and keep in touch over email. Please feel free to contact Amy Haynie (contact information removed) if you have questions or would like more information about youth ministry in the Episcopal Diocese of Fort Worth.