A sweet incense of joy filled the tiny nave as the words of the Book of Common Prayer rang out once again in the white frame building on Church Street in Decatur in Wise County. The familiar prayers fell on the thirsty hearts of worshipers like rain breaking a long drought.

On Sunday, May 17, 2015, Wise County Episcopalians celebrated Ascension Sunday with Holy Eucharist in the small white church that began its existence in 1889 as the Episcopal Mission Chapel of the Ascension. Read the history of the building.

This morning I attended an amazing worship service at the newest church in town, or rather the oldest church in town, “The Holy Episcopal Mission of the Ascension – The Episcopal Church of  Wise County.” You will know it as the Little White Chapel on Hale St. in Decatur, built in 1889 – and it was originally “The Holy Episcopal Mission of the Ascension.” What goes around comes around. All of this came about after a few people and a lotta prayers over several years literally came together in this “sweet little chapel” in the last five days, and that it happened on “Ascension” Sunday is nothing but God’s amazing grace and sense of perfect timing. I swear the building was smiling. 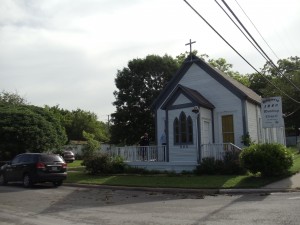 Certainly everyone in the building was smiling. It all came together between Tuesday and Sunday. Ellen and Mark Whitley met with the owner, Larry Motsenbocker, and his fiance Katherine Shields on Tuesday to discuss using the building – and left with the key and their enthusiastic backing.

On Saturday, the Whitleys and their neighbors worked for hours, moving in the altar Mark made, cleaning the building and mowing the lot on which the church sits. .

Praise God from whom all blessing flow…..  If y’all could have been with us today you would have felt the Holy Spirit!  The calla lilies at the foot of the altar were actually crying!  Each leaf had a drop of dew hanging from its tip and I immediately felt they were tears…..tears of joy!  The mission Church of the Ascension was lit up with glory as we celebrated the renewal of worship in that building. The owner of the building even told me to change the sign out in front of the building to show The Episcopal Church of Wise County–because he said, “Your people will want the service times posted.”  We never even asked him.

More than one person remarked that Bishop A. C. Garrett, the great missionary bishop in Texas who originally planted the church, must be smiling down on them.
Shields told the story of how she had stopped by slightly more than a week ago to sit on the bench outside the church and pray. She had prayed that the building would become a space for worship once again. She did not mention this to her fiance, and so when he told her a few days later that Mark Whitley had called to inquire about using the building for worship, she asked, “Did you call him or did he call you?”

“He called me,” Motsenbocker replied.

“It’s the answer to a prayer,” she exclaimed.

Shields found herself wreathed in tears of happiness throughout much of the morning worship service. And she was not alone. It was a very emotional experience for several in the room. Many in Wise County had had to travel long distances to worship with an Episcopal community because Episcopal properties in Decatur and Bridgeport are controlled for now by former Bishop Jack Iker. Some had simply stopped attending church or were going to church at another denomination. But their thirst for the Episcopal liturgy had not waned.

The Wise County Episcopalians were joined by Owanah Anderson, J.D. Todd, Laurie Cruse, and Kipley Parrish of the Episcopal Church of Wichita Falls, who brought along some more prayer books as gifts. Todd also brought six prayer shawls he crocheted for the congregation. They rejoiced with the Wise County folks because they too had once been cast out of their church homes and forced to find other places to gather as Episcopalians in worship. There were several worshipers from the Decatur area as well as from Peaster and Weatherford.

Bishop Rayford B.High, Jr., will visit them on May 31 to confirm Mark Whitley. Coggin will return on June 7.

After an email inquiry to the diocesan office in early November and a conversation with Bishop High to discuss the possible formation of a worshiping community, a small group gathered for an initial planning meeting in February. In mid-March they held a second planning and soon began worshiping in the Boonsville Community Center. And now in May, they have a church building.

Watch a video of Riding Up the Heavenly Way, the sermon of the Rev. Bruce Coggin

Watch a video of the day.