Topher Rodgers, who is in his third and final year at Virginia Theological Seminary and a candidate for Holy Orders in the Episcopal Diocese of Dallas, will become the clergy person in charge at The Episcopal Church of Wichita Falls, beginning July 1. Wichita Falls is his hometown as well as that of his wife, Jennifer. 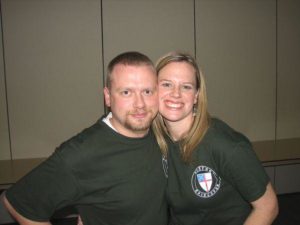 He will be ordained a deacon by Dallas Bishop George Sumner at 3 pm, June 2, 2018, at St. Matthew’s Cathedral, Dallas. After a time as a deacon, he will be ordained to the priesthood. His sending parish is the Episcopal Church of the Transfiguration, Dallas, Texas.

“’The Fig’ is a wonderful place centered upon liturgy, music, service to others, social witness, the household of God, and building God’s Kingdom in the World. No one could ask for a better place to sponsor an ordinand and I am deeply honored to be their Timothy in the world. This adventure is not anything that I ever thought I would do in my life. I grew up unchurched, so my parents never suggested or envisioned me being an ordained minister. My background is economics and policy analysis, so I spent most of my adult life preparing for a career in either academia or civil service,” Rodgers wrote in an email response to questions from Katie Sherrod, director of communication for the diocese.

The idea that he might be called to ordination first arose about 10 years ago in a discussion with his mentor in formational ministry, the Rev. Michael Merriman. Rodgers laughed the idea off, but “around that same time I had first perceived an inner voice probing me with the question ‘…why have you not offered yourself to this order of service in the Church,’” he wrote.

By 2008, he knew it was time to start the discernment process. That was interrupted by the offer of an analyst position at U.S. Government Accountability Office, a career opportunity he had been working toward. But by 2014, the pull towards ordination became very clear as did the realization that saying ‘no’ to the priesthood had been the only time as an adult he had said ‘no’ to the church when it has asked him.to do anything.

“Rather than running to discernment, I have simply stopped running away from what God is calling me to do and to be,” he wrote.

Before discerning a call to the priesthood, he served in numerous lay leadership roles including, but not limited to senior warden, budget and finance chair, catechist, Sunday school teacher, altar emcee, thurifer, acolyte, Eucharistic minister, and Eucharistic Visitor. He holds a Bachelor’s degree in Historical Studies, a Bachelor’s degree in Government & Politics, a Master’s of Public Affairs, and a Master’s of Science in Applied Economics, all from the University of Texas at Dallas, where he was a research, teaching, and editorial assistant as well as being a PhD candidate in Political Economy. Prior to seminary, he worked in a variety of senior financial, economic, and fraud analysis roles for Fannie Mae, GM Financial, the Federal Reserve Bank of Dallas, and the United States Government Accountability Office.