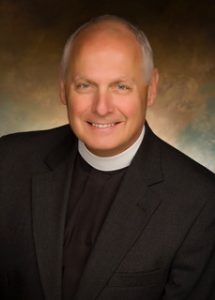 Senior Warden Keen Haynes and the vestry of St. Martin-in-the-Fields, Keller, have announced that they have called the Very Reverend Ronald D. Pogue to be the interim rector. The former rector, The Rev. Scot McComas, left to accept a call to the Church of the Nativity in Scottsdale, AZ.

“We invite you to meet Father Pogue and his wife, Gay on Sunday, September 1, 2019. He will celebrate and preach at each of our services the following weekend, September 7-8, 2019. We look forward to welcoming the Pogues to St. Martin’s,” the announcement said.

A native of Houston, Ron holds a Bachelor of Science degree from the University of Houston, a Master of Divinity degree from Emory University’s Candler School of Theology, and a Doctor of Ministry degree from Houston Graduate School of Theology. His doctoral project, “Equipping and Empowering Christian Leaders in the Congregation” reflects his conviction that in Baptism all Christians receive the same blessing and are called to the same ministry. The Interim Ministry Network credentials him as a Professional Transitional Specialist. His emphasis in ministry has been in the areas of stewardship, Christian formation, and evangelism. He has been a leader in the Church’s response to social concerns and advocacy for marginalized people in our society, including refugees, homeless persons, the unemployed, the mentally ill and handicapped, and persons with HIV/AIDS.

Ron is the creator and moderator of Unapologetically Episcopalian, a Facebook page devoted to celebrating the many positive ways the Episcopal Church is spreading the gospel. In the Diocese of Texas, he has been Dean of his convocation, a member of the Executive Board, chair of the Diocesan AIDS Commission, and Diocesan Ecumenical Officer. He served two terms on the board of the Texas Conference of Churches. Representing the Church in service to the community, Ron has chaired the boards of Interfaith Ministries for Greater Houston, the Mental Health Association of Houston and Harris County, Houston Graduate School of Theology, and the Galveston Chapter of the American Heart Association. He currently chairs the board of Interim Ministries in the Episcopal Church and is secretary of the board of the Interim Ministry Network. The National Conference of Christians and Jews, the Boy Scouts of America, and the National Association of Social Workers have recognized his community leadership.

In describing his personal mission and values, Ron stated, “I am called to foster hope, lead change, inspire action, and glorify God in the service of the Gospel of Christ, for the building up of the Church, and for the sake of the world. The promises I made at my ordination provide a rule of life: listen to others, study and teach, work collaboratively, become who and what I am, remain in intimate relationship with God.”

Ron and his wife, Gay, have been married for fifty years. Gay retired in 2010 after teaching ninth grade English for twenty-eight years and is a writer, artist, and iconographer. They are the parents of two grown sons.

Previous
The Rev. Dr. Wil Gafney honored by Union of Black…
Next
Clergy and lay leaders invited to advocacy…