The Rev. Kevin Johnson, rector of St. Alban’s, Theatre Arlington, is on the slate of candidates for the 15th bishop of South Carolina. The slate was announced Saturday, January 29. According to the South Carolina website, “Walkabouts and Candidate Conversations will be held in the Second Week of Easter occurring Monday, April 12 through Wednesday, April 14.” Much like the Diocese of Fort Worth, the Diocese of South Carolina has been through a schism and rebuilding process. 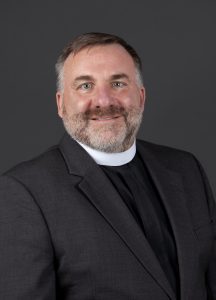 “The Standing Committee has called a Special Meeting of Convention to be held for the purposes of the Election of the XV Bishop of the Diocese of South Carolina. This Special Convention will take place at 9 am on May 1, 2021, at Grace Church Cathedral. If the Convention is not able to meet in person, the diocese will proceed with a virtual platform.”

Johnson was installed as priest-in-charge of St. Alban’s Episcopal Church, meeting at Theatre Arlington, on Thursday, June 11. 2015, by the Rt. Rev. Rayford B. High, Jr. Johnson grew up in Arlington, was confirmed at St. Alban’s, and graduated from Nolan High School. He graduated from the University of Texas, and served in the U. S. Army Corps of Engineers, completing his service career as an assistant professor of ROTC at Texas State University. In 2000 he entered Virginia Theological Seminary. After graduating, he became a curate at St. Francis, San Antonio and in 2007 became rector of St. Peter’s. Johnson designed What’s Next, a congregational discernment process used by St. Alban’s, and subsequently by other congregations in our diocese to discern what is God’s call for each congregation. It also is being used nationally by the Episcopal Church Building Fund in their work.

Another person on the slate is well known in this diocese. The Rev. Canon Ruth Woodliff-Stanley has been a frequent visitor to the diocese with her work for the Episcopal Church Building Fund.

“The Standing Committee is very pleased to announce the following slate of candidates for the XV Bishop of South Carolina (listed in alphabetical order by last name):

Read more about the candidates

Here is the letter Johnson wrote to the people of St. Alban’s.

Dear Beloved People of God who are St. Alban’s,

Last September a colleague and friend of mine sent me a text which read “You must put your name in for this.” “This” was the discernment process for bishop of the Diocese of South Carolina. I was somewhat flummoxed by her request.

Then I remembered what I’ve learned about how the Holy Spirit works – when she speaks it’s best to listen. So, I prayed and talked with some colleagues and prayed some more. In the end, I did submit my name.

Today, the slate for election to Bishop of South Carolina will be released and my name will be on it, along with a few other candidates. Over the next several months there will be a lot of conversation between the slate of candidates and the people of South Carolina as they enter into the important work of discerning who God is calling to be their next bishop. On May 1st their Diocese will gather in convention, there will be an election, and, God willing, someone will be called to be consecrated as bishop in October.

Between now and then I ask for your prayers. Please pray for me, for the people of South Carolina, and for ourselves as we seek to know and live out God’s desire. I ask your gracious patience if you find me distracted somewhat; it’s a lot to hold in my mind and heart. And I ask for your joy as we all embark upon this unknown road together, for I know this affects all of us and each of us.

God bless us, every one.