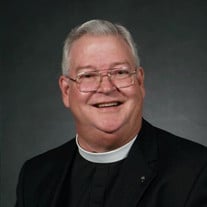 The Rev. Marvin Boyd (Johnson) Shannon, Jr.  died on April 20, 2020, at Cityview Nursing Home in Fort Worth. He is preceded in death by his parents, his older sisters, Martha Angelique (and her husband Edward Hannigan) and Don (and her husband George Morgan).

He will be buried at Oakwood Cemetery, where he once served on the advisory board, and is within walking distance from where he grew up. Due to current quarantine restrictions, the graveside service is limited to immediate family only. There will be a memorial service open to the public in the near future, once restrictions are lifted.

If you wish to make a donation in honor of Johnson, the family has set up two memorial funds to choose from. The first is through All Saints’ Episcopal Church and their support of Amazing Grace Children’s Charities in Kenya: https://www.tmcfunding.com/funds/rev-m-b-/4521/

The second is for donations to the Alzheimer’s Association: https://www.tmcfunding.com/funds/rev-m-b-johnson-shannon-memorial-alzheimer-s-association/4522/

Johnson was born on July 30th, 1948, in Fort Worth, Texas to Marvin Boyd Shannon Sr. and Martha Elbertine Shannon (Moxley). He was the youngest of their four children, the only boy. However, for most of his life, he would go by “Johnson.” That is another story, but Johnson could often be quoted as saying, “that reminds me of a story.”

He was a graduate of North Side High School, where he began dating his wife Mary Ellen (Hood). He went on to the Dallas Institute of Mortuary Science, graduating in 1972 and served as a third generation funeral director at Shannon Funeral Home. He received his BBA from Texas Christian University in 1974. Briefly living in Iowa City, Iowa, with his family (1978-1980), he would return to work in the promotional sales field for several companies, before deciding to pursue a vocation to the ministry that called to him since being an acolyte at St. Anne Episcopal Church.

In 1995, he and Mary Ellen moved to Wisconsin where he attended Nashotah House Episcopal Seminary, graduating with an M.Div in 1998. After assignments in Milwaukee and Great Britain, he returned to Texas to be ordained in the Episcopal Diocese of Fort Worth. Rev. Shannon would serve parishes in Arlington (St. Albans), Hillsboro (St. Mary) and Laguna Park (Our Lady of the Lake) before returning to Fort Worth as a Pastoral Associate at All Saints Episcopal Church on the city’s west side where he retired in 2013.

While a learned and Christ-fearing man, Johnson loved a good ribald joke, TCU football, and the Texas Rangers, but he always remained faithful to his childhood love, the Fort Worth Cats. His laugh often entered the room before he did and he never turned down a good meal. Like his Irish forbears, he loved sharing and hearing a good story. Despite all of his degrees, he often described his shop class that he took at J.P. Elder Junior High, as his most useful academic endeavor, which led to his life-long love of wood-working and tinkering with everything.