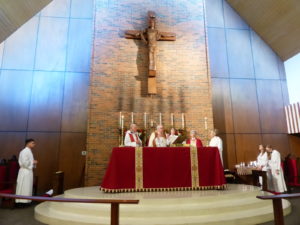 In his opening remarks, Bishop Scott Mayer said, “On July 14, 1946, Americans around the nation opened their Sunday morning newspapers to read in bold headlines that “Congress Approves a Huge Loan to Britain” – post-war Britain. That same day, Dr. Benjamin Spock’s book would be published: “The Common Sense Book of Baby and Child Care.” On that Sunday afternoon, Lou Boudreau of the Cleveland Indians would hit 4 doubles and a homer, as his team would lose to the Boston Red Sox as Ted Williams hit 3 home runs and collected 8 runs batted in.

And on that Sunday morning, 55 people gathered with C. Avery Mason and Clarence Westapher in a Sunday School classroom at Meadowbrook Methodist Church. Thus began the organizational process for this community of faith, now called St Luke’s in the Meadow Episcopal Church.”

He told how, during 1947, St Luke’s grew from 69 members to 115. They bought six large lots on the east side of Fort Worth for $4,000, they built their first building for less than $15,000, their first electric bill in the new building was 73 cents and their first water bill was one dollar. In 1948, they changed their name to St. Luke in the Meadow, and the Diocese of Dallas made them a parish.

“Today we celebrate and give thanks for seventy years of life as a parish. I would like to take a moment to express my gratitude to you, the people of St Luke’s in the Meadow, for your sacrificial service in and through this beautiful tradition called the Episcopal Church. Thank you for your history of lay leadership, as during your 70 years you have been faithful, compassionate, influential, and at times, bold. You have made a difference in the city of Fort Worth, particularly in your neighborhood, and you have made a difference to one another,” he said.

He recognized the former clergy who were present – the Reverend James T Horton, Jr, who served as rector from 1978 to 1985 before leaving for Emmanuel Church in San Angelo and his wife, and the Reverend Susan Slaughter, who was called to be the rector in 2008 and served until taking retirement in 2013. He also recognized the Rev. Gayland Pool, who served as rector from 1985 until 1990, and who died in December, 2017.

“And finally,” he said, “I would like to recognize your current priest for her leadership, pastoral care, and service. The Reverend Karen Calafat has served here since 2014.” The congregation responded with prolonged applause.

He spoke more about St. Luke’s in the body of his sermon. You can listen to a podcast and/or read the text.

There was a short video filled with photos from the history of the parish. At the reception, people were pleased to see a timeline painted around the parish hall walls. In addition to the photos and notes already on the timeline, people were invited to use sticky notes to post their own memories along the painted line.

There was much feasting, remembering, and loving embraces as old friends greeted one another and new friends were made.