The Very Rev. Cynthia Briggs Kittredge, Dean of Seminary of the Southwest, preached this sermon on Friday, November 9, at the Convention of the Episcopal Diocese of Fort Worth. 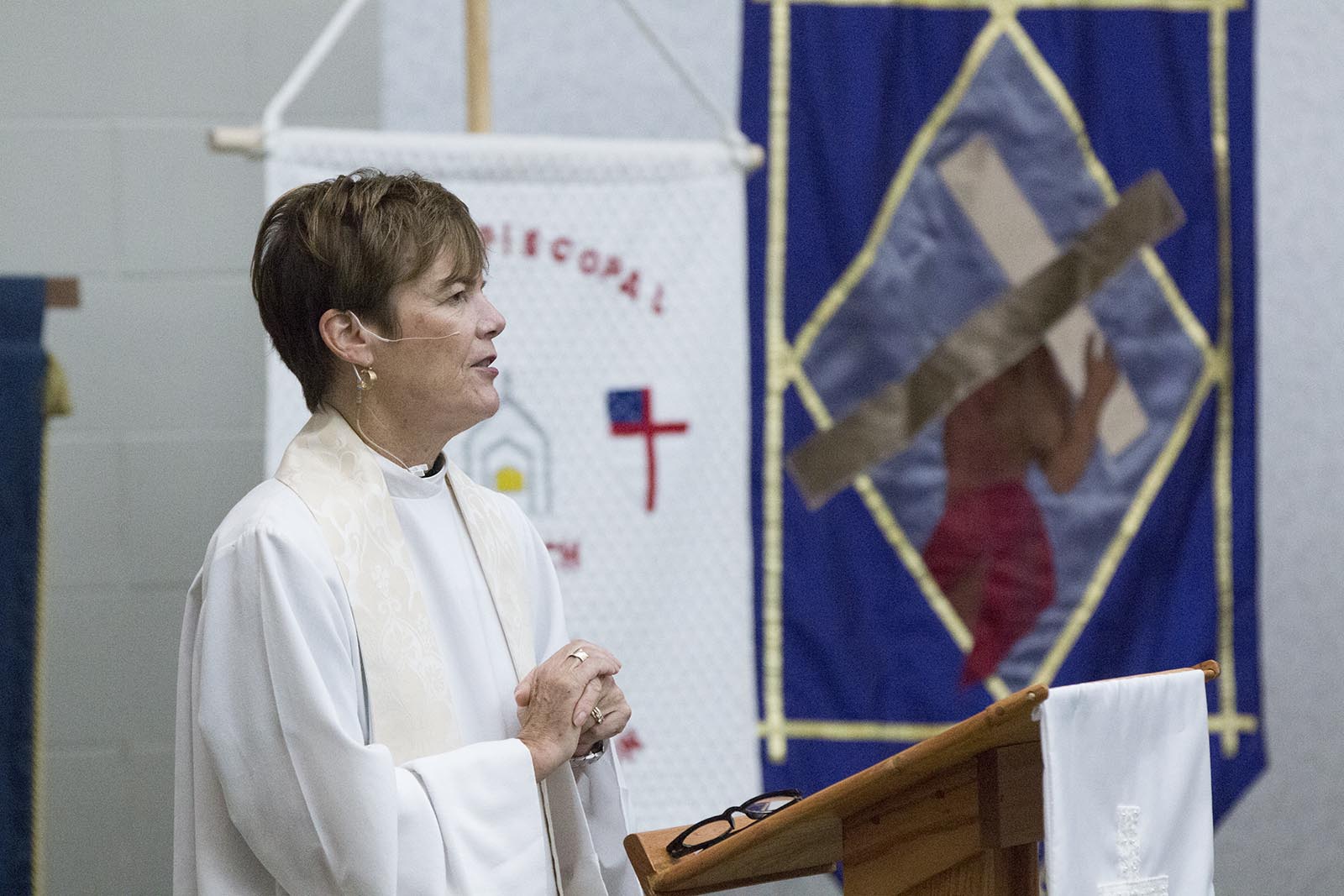 “For God did not give us a spirit of cowardice but rather a spirit of power and of love and of self discipline.” (2 Timothy 1:7)

Grace to you and Peace. I bring Greetings from the Seminary of the Southwest in Austin where I happily serve as Dean and President.

It is an honor and joy to be with you as you convene in faith to do the work of the church in this place and to rekindle the spirit of God among us.

In the fall of 2016 I was teaching the Middler Bible course to the second year students in the Master of Divinity program. We read together the major prophets, gospel of John and the Book of Revelation. Although I taught for many years as a professor, now that I am Dean, I don’t get to teach a semester-long course very often any more and to enjoy that groundedness of being in the classroom every Monday and Wednesday morning at 10 am.

It was the Wednesday after Election Day 2016. The students had stayed up late into the morning waiting for the results of the presidential election. For the party that evening the seminary families had made red cupcakes and blue cupcakes, suspended blue balloons and red.  All were welcome.

But as it was in many places, the outcome of the election was a surprise.

Some were delighted, others were shocked, disoriented, and upset.

It was really hard to concentrate on the gospel of John that morning, but we managed, and I promised that in the last part of the class we would save time to debrief.

Around the classroom we went, student by student. Respectfully, carefully, and passionately, one by one each shared their feelings. I was deeply moved by their honesty. I remember one student particularly vividly.

Forbes was from Alabama. He was young. He and his wife had just had their first baby. He has a huge heart and the gift of an amazing singing voice to express its full range of tenderness and intensity. In spite of his gifts, Forbes was insecure about his academic abilities and hesitant about his skills.

When it was his turn, Forbes spoke slowly.

“Every since I’ve been here at seminary, I have struggled and doubted whether I had anything to say. For the very first time, this morning, I woke up, and I knew I had something to say.”

Jonathan Merritt is a journalist and scholar of American Christianity. He wrote recently in the NY Times that although 70 percent of Americans identify as Christian, an overwhelming majority say that they are uncomfortable talking about faith (Jonathan Merritt, “It’s Getting Harder to Talk about God,” New York Times, October 13, 2018). His survey showed that even churchgoers are reluctant to speak about God.

Another study he cited analyzed 50 terms associated with moral virtue.— Even words like “love,” “patience,” “gentleness” and “faithfulness” — have become much rarer since the early 20th century. Humility words, like “modesty,” Compassion words, like “kindness,” Gratitude words, like “thankfulness,” All declined by at least 50 percent.

According to Merritt’s study, a range of internal conflicts is driving Americans from God-talk.

Some said these types of conversations create tension or arguments (28 percent); Others feel put off by how religion has been politicized (17 percent); Others still report not wanting to appear religious (7 percent), Or “sound weird” (6 percent)

Have we lost our voices?

I’m sure that all the reasons cited in the survey are true, but I sense that there are deeper reasons why Episcopalians don’t talk God as much anymore, and why I find myself at times, being quiet when I should speak.

There is Forbes’ sense of inadequacy: ”we do not have enough, knowledge, we don’t have the eloquent words and persuasive arguments.

Perhaps we fear that we don’t have a conversion story that is dramatic enough to compete with other Christians who are positive that they have been “saved.”

Maybe we are vaguely ashamed about the reputation of the Episcopal Church — one of internal conflict and external “decline.”

In former industrial cities in the Midwest and on new England village greens, Episcopal churches may still be standing in the center of downtown, but they are no longer filled with the professional leaders and their families, for whom mainline church membership used to be an expectation.

But even more serious dangers threaten our nerve.

I have always thought that the image of the “tree of life” is one of the most poetic, luscious, promising, and beautiful in the biblical tradition. After the terrorist shooting in Pittsburgh, “Tree of Life” has now become popular synonym for “massacre.”

Where is God? Deep deep fears lie at the root of our speechlessness.
Maybe we are not strong enough to survive. Maybe we are alone.

The New Testament epistles are an underappreciated part of our canon. These letters harness Christian theology from person to person, church to church, for encouragement, literally for the “strengthening of the heart.”

When our spirits have grown cold, these letters encourage us…. it’s like they pile more dry sticks on the coals and blow upon the dying fire, so it will blaze hot and bright.

Here at the end of his life Paul writes to Timothy and the words resound to us
in this age of forgotten language and loss and fear.

Wasn’t Forbes in his first years of seminary hung up and hobbled by a spirit of cowardice”?

Might “spirit of cowardice” or “timidity” or “fear” be used to describe the 6% in the survey who were concerned that they would “sound weird”? Could it speak of our reticence, our shame, our silence?

Paul is speaking to those of us who have lost our voices. And No! It does not criticize or judge. It just speaks of the reality of cold hearts and tied up tongues.

God calls us to courageous speech.

You didn’t get your nerves and self-doubts and politeness and insecurity from God!

From God you received the spirit of power – spirit of love, spirit of discipline.

We rely on the power of God, “who saved us and called us with a holy calling, not according to our works but according to his own purpose and grace.”

Are we made silent by fear? Are we so traumatized by extremism and terror and war that we are in despair? Those eleven bodies on the sacred floor of the synagogue.

Does suffering mean that God is gone?

Or do we remember that we have been saved by the story of Jesus, a story with a cruel execution right smack in the middle of it?

“My God my God why hast thou forsaken me?”

And the power of God triumphs over even that?

“He is not here. He has been raised. See the place where they laid him.”

“Join with me,” Paul says. “Join with me in suffering for the gospel.” Suffering is not mean that God is absent, but that God is present working within pain to bring new life. Suffering can return to us our voices.

We are not alone. We are surrounded by a great cloud of witnesses whom we have known in our life, and who in heaven encircle the throne of God, and in whom we are knit together – the past, the present, and the life to come. Leo the Great and All the Saints. All races tribes and nations – those who have been broken, now made whole. The saints restore to us the language of goodness.

In a few minutes as part of the renewal of baptismal vows the Bishop will sprinkle us with tiny drops of water shaken from the aspergillum.

When those minute splashes of water touch our skin we will remember our dramatic conversion. We will relive our burial with Christ, and we will rise to new life with him.

The faint touch of water recalls that which touched our own infant heads. It summons up the dry passage through the ferocious Red Sea. It evokes the river Jordan chilly and cold, and it speaks of the water that God gives gushing up to eternal life.

We have everything we need. We remember what we know. We have something to say.

That semester in 2016, we ended Middler Bible with the book of Revelation.

Then the angel showed me the river of the water of life, bright as crystal, flowing from the throne of God and of the Lamb through the middle of the street of the city.

On either side of the river is the tree of life with its twelve kinds of fruit, producing its fruit each month; and the leaves of the tree are for the healing of the nations. (Revelation 22:1-2)

Let us encourage each other to power and love and self discipline. Let us kindle the fire among us so it blazes hot and bright. Let us recover our voices and proclaim the good news that we know.

Thanks be to God. Amen.

Previous
Jesus' Mission Statement
Next
Arise, shine, for your light has come