Seminary of the Southwest

Andrew Ellison graduates Tuesday, May 24, in the Seminary of the Southwest‘s 65th commencement exercises in Austin with a Master of Divinity degree. He was ordained December 16, 2015, and has accepted a position serving as curate at Trinity Episcopal Church in Marshall, in the Diocese of Texas.

Lisa Neilson graduated with a Master of Divinity from Virginia Theological Seminary on Thursday, May 19, in its 193rd Commencement. She was ordained as a deacon January 15, 2016, and has accepted a position as missioner on the campus of Texas A&M University in the Diocese of Texas.

Three students from the Diocese of Fort Worth graduated from Brite Divinity School on Thursday, May 19, all receiving the Master of Divinity degree. View a photo album of the May 7 hooding ceremony online also to find individual photos.

Lynne Waltman has been serving as deacon at St. Stephen’s in Hurst and works as Business Manager at All Saints’ in Fort Worth. She was ordained January 15, 2016.

Stephanie Moncrieff has been serving at Trinity in Fort Worth. 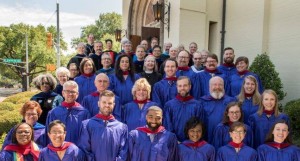 Stephanie is on the right side, second row up; Nick is second from the right, third row up; Lynne is right in the middle, wearing a clerical collar. Photo used with permission of Brite Divinity School.

Previous
Partnership between theatre and church gives…
Next
St. Martin's hears Mass in French on Pentecost