Marriage in The Episcopal Church

When two people desire to form a lasting, lifelong partnership with each other in God’s love, they turn to marriage. Marriage is a union, an unfolding process of intentional living and growing together. In a marriage, each person as an individual and both as a couple gradually transform and mature in God’s presence and image.

Christian marriage is a sacrament— an outward and visible sign of God’s grace bringing two persons together and nurturing their love.

Marriage is a vocation, a calling to a particular vowed manner of life over the course of a lifetime. Not all people are called to marriage, but for those who are, it is to be entered into with mutual care, respect, and delight.

All this is why a wedding in The Episcopal Church is a sacred ritual that acknowledges and celebrates, before God and the community, the desire of the couple to enter a lifelong covenant. It symbolizes the ending of former and other potential ways of life, establishing a particular pathway into the future—in which two people promise to travel together. By uniting within the context of a faith community, the couple recognize that God is active in the love they feel for one another, and they place their relationship in God’s care. The couple make their vows before God and the gathered community of family, friends and the Church. They in turn receive the grace and blessing of God to help them fulfill those vows.

A wedding in The Episcopal Church is shaped by The Book of Common Prayer, Canon law, thoughtful and beautiful liturgical worship, and the laws of the state in which the marriage occurs. The Episcopal clergy person officiating at a wedding is responsible to provide pre-marital counseling and assists the couple in shaping a marriage service that reflects the tradition of the Episcopal church and the uniqueness of the persons who are committing to marriage. 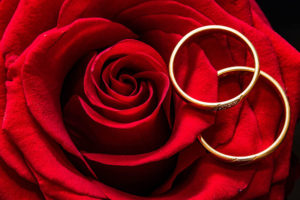 The Episcopal Church has approved supplementary liturgical resources for more modern weddings and relationship blessings, including same-sex weddings, in the form of the resource I Will Bless and You Will Be a Blessing: Revised and Expanded 2015; at that link, scroll down to find two free pdfs to download or read.

The Episcopal Church requires that:

Dioceses and individual congregations may have their own additional requirements for couples seeking to be married there.

The member of the clergy who solemnizes a marriage typically meets with the couple on several occasions prior to the service to discuss the meaning of Christian marriage in the couple’s life together.

Marriage in the Episcopal Diocese of Fort Worth

Find one of our congregations and connect with a priest there.

The Rt. Rev. J. Scott Mayer, bishop of the Episcopal Diocese of Fort Worth, writes about marriage:

Marriage is a sacrament, and as such The Episcopal Church takes it seriously. Historically, Christian marriage is a solemn and public covenant between a man and a woman in the presence of God.

In the summer of 2015, Episcopalians witnessed two momentous decisions about marriage. The first was the Supreme Court ruling on same-sex marriage which affects our civil rights. Then the 78th meeting of the General Convention of The Episcopal Church acted to extend the sacrament of marriage to same-sex couples. This decision was the culmination of forty years of discernment in The Episcopal Church.

The marriage resolutions approved by the General Convention are inclusive of the historic diversity which characterizes our tradition. They give access to marriage liturgies to all couples while protecting the consciences of clergy and bishops who dissent theologically. It has always been true that no priest can be forced to perform any marriage. That remains the case.

I have given permission for the clergy of the Episcopal Diocese of Fort Worth to perform marriage liturgies for same-sex couples. I also have asked them to extend pastoral care and warm hospitality to couples from other dioceses whose bishop disagrees with the decision of General Convention. This hospitality extends to priests of the congregations those couples attend, to the degree their bishop allows.

Marriage is marriage, whether between a man and a woman or between a same-sex couple. It remains a solemn and public covenant between two people in the presence of God. The expectations and requirements are the same for all couples in weddings officiated by the clergy of this diocese.

We are aware of the rich diversity of opinions held on this topic. But always, we are sisters and brothers bound together in the love of Jesus Christ. God loves us all. No exceptions.

We want to be married. Where do we start?

With your congregation’s priest. Your priest will help you schedule pre-marital counseling and select a date for the wedding. Preparing couples for lifelong relationships is an important pastoral responsibility. Care should be taken to ensure adequate time for preparation. Thorough preparation is required and should include conversation about the Christian understanding of Holy Matrimony, money, communication, relationship roles, sexual relations, family, any minor children, and finally, planning the liturgy.

What if I'm not a regular church-goer?

You are welcome in The Episcopal Church. In our Church it is required that at least one of the parties must be a baptized Christian; that the ceremony be attested by at least two witnesses; and that the marriage conform to the laws of the state and the canons of this church. A priest or a bishop normally presides at the Celebration and Blessing of a Marriage, because such ministers alone have the function of pronouncing the nuptial blessing, and of celebrating the Holy Eucharist. If you wish to be married in an Episcopal church, here is a list of congregations in this diocese and a also a searchable map of congregations. Please contact and schedule a meeting with the priest. Note that each congregation may have additional requirements for couples being married in their churches.

What if I've been married before?

In situations in which there has been a previous marriage or civil union, adequate time should be allowed to comply with all diocesan policies, usually at least two months. Your priest will explain and guide you through this procedure.

My fiancé and I are members of an Episcopal church in a diocese whose bishop does not permit same sex marriages. The bishop has referred us to your diocese

Bishop Scott Mayer of the Episcopal Diocese of Fort Worth does permit the clergy of this diocese to perform same-sex marriages. You can read his statement above. The requirements are the same as for marriages of a woman and man. Please call the Canon to the Ordinary, the Rev. Janet Waggoner, at 817-880-1050, or email her at canontotheordinary@edfw.org to discuss arrangements.