Rick Grimes, organist and choirmaster at All Saints’ Episcopal Church in Fort Worth, concluded his 24-year tenure on Rally Day at All Saints’ this past Sunday, September 9. The vestry honored him at his retirement with a proclamation, which was printed in the service leaflet.

View Grimes’ biography on this site.

Read the All Saints' rector and vestry's resolution honoring Grimes

Resolution of Appreciation and Commendation

WHEREAS, Frederick O. Grimes, III, moved back to his native home in Hillsboro, Texas, after a successful career of twenty-five years as a church organist, music director, recitalist, and champion of the arts in New York, New York; and

WHEREAS, Frederick O. Grimes, III, made significant contributions in his musical field including all with whom he has come into contact, and his performance has gone above and beyond the ordinary demands of the job; and

WHEREAS, Frederick O. Grimes, III, served with distinction as Organist and Choirmaster of All Saints’ Episcopal Church for the past twenty-four years, directing the All Saints’ Choir, Children’s Choir, and Handbell Guild; and

WHEREAS, Frederick O. Grimes, III, was instrumental in the funding, design, and installation of a new five-manual pipe organ for All Saints’ Episcopal Church; and

WHEREAS, the many administrators, students, adults and staff who have worked with Frederick O. Grimes, III, throughout his career have been greatly blessed by his knowledge, diligence and deep commitment to higher musical education; and

WHEREAS, by consistently demonstrating the highest standards of professionalism and integrity while fiercely defending the dignity of all, Frederick O. Grimes, III, proving to be a powerful and effective standard-bearer for the reverence and aesthetics of Anglican liturgy and choral music during both good and challenging times; and

WHEREAS, through his exceptional communication and leadership skills, Frederick O. Grimes, III, served as an example and inspiration to numerous fledgling colleagues who acknowledge and appreciate his important contributions to their professional careers;

NOW THEREFORE, BE IT RESOLVED: That the Rector, Vestry, Wardens, and Parishioners of All Saints’ Episcopal Church offer their profound gratitude, admiration, deep and sincere appreciation to and commend Frederick O. Grimes, III, for his extraordinary contributions to our parish church for the past twenty-four years and express their heartfelt gratitude and respect to Frederick O. Grimes, III, for his tireless labor and devotion to the role of Organist and Choirmaster these past twenty-four years.

SIGNED THIS THE NINTH DAY OF SEPTEMBER, IN THE YEAR OF OUR LORD, 2018, on behalf of the Vestry, and Wardens of All Saints’ Episcopal Church, Fort Worth, Texas.

Grimes’ career as an organist started at the age of twelve, when he began playing at the Presbyterian church in Hillsboro, and he plans to return there in his retirement. “It’s 30 seconds from home, with one rehearsal and one service per week,” he explained. Early on, although Grimes could play the organ, he was more fascinated by how it worked. “I first became interested in it mechanically,” he said, ” and then later musically.”

Grimes’ first teacher in organ building, beginning when he was in about the seventh grade, was Robert Markham, head of the organ department at Baylor University; Markham’s workshop was under Waco Hall. Later, he also studied organ building with Karl Schuke in Germany, “and that gave way to playing,” Grimes said. “A lot of organ builders also play, but at some point you should really pick one or the other” since the two activities involve working with your hands, but in different ways. This background of knowing specifically how organs produce their wide range of sounds proved useful, as Grimes was called on to consult on the design of several organs. More detail on these is in the biography linked above, but one in particular was the organ at All Saints’. Each organ is unique; and not just because of the construction of the instrument; the space in which the instrument is played is part of its sound. Grimes has played organs all over Berlin and Paris while studying in Europe, several in New York City, the National Cathedral in Washington, D.C. (the nave was not completed yet at that time), and two recitals at the cadet chapel at West Point, which at the time was the largest organ in the US and fourth largest in the world. The length of the nave is such that there can be as much as a three-second delay from the time the organist plays a note to when its sound is heard reverberating back. This creates a challenge in playing, particularly for complex pieces; “you really have to focus.” He also recalls playing, in a hall in Methuen, Massachusetts, the first organ from the Boston Symphony hall.

After studying in France and Germany, Grimes came back to the US to work as associate organist at St. Thomas Episcopal Church in New York City and later as Director of Music and Organist at Holy Trinity Lutheran. At Holy Trinity he produced and directed the famous Bach Vespers program every Sunday afternoon; the church cantatas, organ music, and chamber works of Bach were presented weekly to capacity crowds at Vespers by a professional choir, soloists, and chamber orchestra.

“After 25 years in New York, I came back to Texas (the promised land),” Grimes said, starting at All Saints’ on the Sunday after Easter in 1994. At All Saints’, in addition to playing the organ for regular and special services, he worked with the adult choir and children’s choir, organized concerts, encouraged young musicians, brought in guest musicians, and generally enriched the church’s musical offerings. He also oversaw the design and installation of the current organ at All Saints’. “It was a singular pleasure helping to design that organ,” he said. Read more about the design and construction of the All Saints’ organ further down in this article.

Grimes was also active in the Fort Worth Chapter of the American Guild of Organists (AGO) and served as its Dean and in various other capacities. Brad Volk, an organist in Fort Worth who plays on occasion at Trinity, is also a member of the Fort Worth chapter of the AGO and served as Sub-Dean when Grimes was Dean. “I really enjoyed working with Rick. He taught me everything I know about the AGO,” Volk said, “and he brought a lot of knowledge and energy to the chapter.”

Now in his retirement, Grimes is looking forward to continuing to play in Hillsboro, taking back his old job from over 50 years ago. The new organist at All Saints’ will be Clive Driskill-Smith, whom Grimes has known and whose career he has watched for several years, bringing him to All Saints’ on three occasions over the past 12 years for recitals. “He has a long history in the Anglican musical tradition, and he is extremely talented and personable – and he’ll make a good Texan.”

Grimes made a lasting impression on the choir at All Saints’, as members of the choir attest. Lynne Minor recalls visiting All Saints’ when she was considering joining the Episcopal Church, and the music touched her. She later joined the choir and enjoyed the challenge that Grimes offered the members. “It was very worthwhile being in the choir. I would put off doing other things to be there; he is so brilliant musically.”

Grimes integrated the choir into All Saints’ annual Christmas Concert, a tradition that continued to grow, in collaboration with an ensemble of members of the Fort Worth Symphony. It’s a highlight every year. He also encouraged younger singers, leading a children’s choir, which has been fruitful and also challenging. It’s not easy, he noted, with people’s lives becoming more hectic and so many activities competing for families’ diminishing free time. “It’s very important, though” he said. “Children’s choir programs nurture adult choirs later.” Grimes enjoyed introducing children to the organ – he’d often let children who were curious about it come up after the postlude ended the service and look at the console or try playing some notes.

He introduced groups in the congregation to the organ also, always pleased to share more about its capabilities to help members connect more with the music they heard every Sunday by knowing more about how it was produced. “Several times, the Women of All Saints’ invited Rick to explain the organ. You’d be surprised how many people can fit around the console,” Minor said. She described the group all listening while Grimes showed where the horns, flutes and other voices are played on the keyboard and where the pipes for each of the voices are, such as the trumpet pipes along the back wall. “One thing about Rick’s playing that I love is his ‘tone poems,’ where he changes the voicing and other aspects of the sound to match the text in each verse of a hymn,” Minor said. “Once he had pointed these things out, I started noticing how much richness he brings to the music. Rick’s playing is melodic, beautiful and flowing.”

Grimes worked with Fort Worth organ builder Dan Garland to design the organ at All Saints’, with a particular set of priorities in mind.

The most important things Grimes wanted were flexibility, beauty and warmth. “It needed to be able, first of all, to play the music of the Episcopal liturgy, and second, to accompany the choir, and third, to play as much of the major organ repertiore as possible.”

Grimes humorously recalled his conversations while consulting with Garland on the design and building of the organ: “I’d say, ‘Dan, I want this flute to sound like this,’ and we’d argue about it for a while, and then he’d either make it like I wanted or like he wanted.”

Ultimately, the organ at All Saints’ is essentially just what Grimes wanted; it can be described as an American classic instrument, in that it tries to play many different styles, “which is necessary for churches in my opinion,” Grimes said, since the music could be Brahms one week and Bach the next. Consequently, the instrument has a wide range of tonal ‘colors’ intended to enhance many styles of music; these are produced using the organ’s various stops.

The instrument includes 85 ranks of pipes, played on five manuals (keyboards). The largest of the pipes are more than 16 feet long, and some of the smallest are smaller than a normal lead pencil. Any of the five manuals can be coupled to any other, which allows the organist a great deal of flexibility in how to most easily produce the specific types of sounds needed. Overall, the organ at All Saints’ is voiced more mildly than some other organs in the area that are in larger spaces; the relatively smaller space of the nave called for a warmer sound, Grimes felt. These kinds of characteristics of the sound, in addition to simply which note a pipe produces, are a product of how the pipe is scaled – its diameter compared to its length; “that’s the art of the organ builder.”

The organ was built and installed in stages over about a two-year period, with the dedication of the complete instrument in 2001. Read more detail about the construction and installation of the All Saints’ organ in the builders’ notes on Garland’s website. 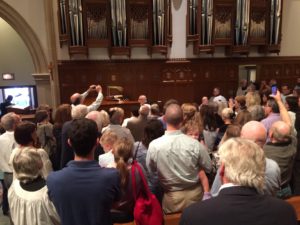 A large crowd of parishioners filled the choir to witness Grimes’ performance of his final organ postlude, the magnificent Toccata from Symphonie V by Charles-Marie Widor. When the last note was struck, the crowd gave a lengthy standing ovation.

In lieu of personal gifts and in consultation with Rick, All Saints’ has established The Frederick Grimes Organ Scholarship. The scholarship will support an organist to work under the organist and choirmaster as an apprentice and “second pair of hands” to assist in all aspects of the music ministry at All Saints’.