Owanah Anderson, publisher of the weekly newsletter “Joyful News Notes” for The Episcopal Church in Wichita Falls, talked with Tracie Middleton this week about reaching the milestone of 400 editions. 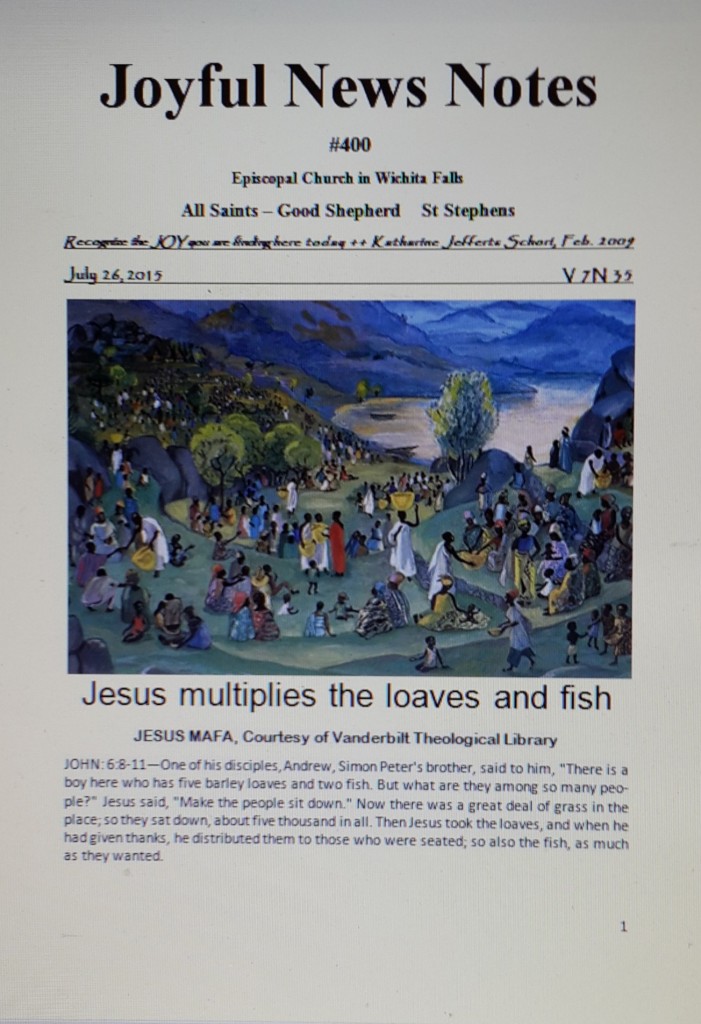 I hear that you are putting out the 400th edition of “Joyful News Notes” this week. How did the “Joyful” get started?

“It’s funny you called; I’m working on it right now, and I was just thinking about that.”

Anderson recalled a series of negative events leading up to the eventual split in the diocese. “Then Millie Lancaster and I were invited to a New Year’s lunch at Gayland [Pool] and Katie’s [Sherrod] house in 2008, and we found out we weren’t alone of the people who wanted to stay with The Episcopal Church.”

“So we joined with some others and became a vibrant ‘homeless’ community.”

It was not smooth sailing, Anderson said. The displaced Episcopalians of All Saints’, Wichita Falls, had a hard time finding a location in which to worship.

“We bounced around a few places that didn’t welcome us for various reasons: we ordain gay people, and we serve alcohol.”

The group was starting to get discouraged until they attended the reorganizing convention in February of 2009 called by the presiding bishop, the Most Rev. Katharine Jefferts Schori. In her sermon that day Jefferts Schori exhorted those gathered to “recognize the JOY you are finding here today.” It was a turning point.

“We decided, ‘We’re going to quit feeling sorry for ourselves!’ and we had T-shirts made that said ‘I’m a JOYFUL Episcopalian.’ 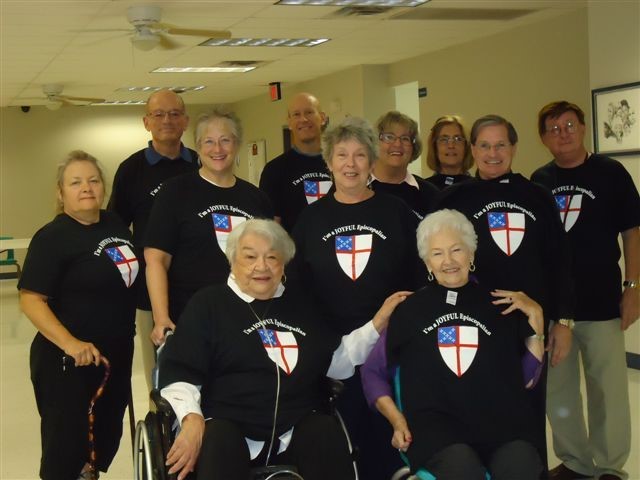 Bishop Jeffert Schori’s quote became the tagline for the newsletter, Anderson explained. “We have carried that idea forward.” The first issue covered the presiding bishop’s visit, “and it’s been weekly ever since; we have not missed a week.”

Anderson is not sure exactly how many people receive “Joyful,” but she has four mailing lists, including members from the churches in Wichita Falls, newer members of the Diocese of Fort Worth that have come in the past six years, and various friends from across The Episcopal Church and even beyond, including a group in New Zealand. The presiding bishop is a fan; once, when the newsletter was a little late coming out, Anderson received an email from Jefferts Schori, asking “Where is the ‘Joyful’ for this week?”

What do you enjoy most about putting “Joyful” together?

“I enjoy the research; I read the lessons very carefully and look at Sermons That Work on The Episcopal Church website. I research the Vanderbilt Divinity Library’s lectionary page for images. I enjoy making the pages look as good as I can.”

She pays particular attention to the cover, which features an image, usually linked to the Gospel reading for the week.

“I have a great love for art and museums,” Anderson explained. “I spend a great deal of time finding just what I want for the cover.” This theological exercise in exploring the Gospel has led to some powerful responses. In fact, the cover for the 400th edition reprises a painting that appeared on the cover of “Joyful” six years ago to illustrate the feeding of the 5,000. It created a challenge for the community. “It was the first year we were out of our buildings,” Anderson said. “And we decided we could feed 5,000 people.”

They worked through Episcopal Relief and Development, local food banks, and Meals on Wheels – each of which could provide a person a meal for about a dollar. Members raised $5,000 from August to Christmas. “We had help from everywhere – checks coming in from all over.”

How did you become an Episcopalian?

“I married one! But I flunked my first Inquirer’s Class. We had a priest who was a little snotty about Baptists and was always making remarks. I believe we all have an obligation to find our own path. Being a Baptist suited my grandmother quite well. It wouldn’t suit me at all, but I still didn’t appreciate disparaging remarks, so I decided ‘I don’t believe I’ll go along with this.’ My husband was a very loyal Episcopalian, though, and he was hurt that I didn’t join, so later I gave it another try.”

Once she joined, Anderson was committed to The Episcopal Church wholeheartedly. She went on to work with Presiding Bishop Edmund L. Browning for twelve years as staff officer for American Indian/Alaskan Native ministries. She also wrote extensively and published several books.

“Journalism is a talent God gave me; if I can continue, I will. I’m going to be 90 on my birthday, and I enjoy having something I can contribute to.” – Owanah Anderson

Previous
Venture 'Into the Woods'...and help some good…
Next
Matter of Balance class at St. Christopher