Long time lay leader Richard Chowning died Friday, July 10, 2020, at Harris Hospital in Fort Worth. His wife, Barbara Evans Chowning, was at his side. 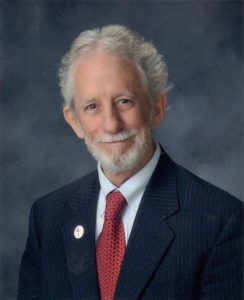 He was a delegate from All Saints’ Fort Worth to several diocesan conventions, serving more than once on the convention credentials committee for the reorganizing diocese. He served on the Commission on Diocesan Structure, a body that grew out of Resolution 4 at the Special Meeting of Convention in February 2009, calling for accountable, transparent, participatory decision making. Reading the resolution makes it clear why Chowning was appointed. It was right up his alley.

A RESOLUTION REGARDING ACCOUNTABLE, TRANSPARENT, AND
PARTICIPATORY DECISION MAKING

WHEREAS the Diocese of Fort Worth, at a special meeting of Convention on this
seventh day of February, 2009, means to reorganize in accession to the constitution and
canons of the Episcopal Church and in the spirit of the Baptismal Covenant in the Book
of Common Prayer, 1979; and
WHEREAS the diocese commits itself to empower the ministries of all the
baptized—lay people, deacons, priests, bishops—and to build into its mission and
ministry a decision-making process in which all orders of ministry and representatives of
all members of the diocese participate fully:
BE IT THEREFORE RESOLVED that this special meeting of Convention direct
the standing committee to appoint a committee of from five to seven members to design
and implement a process by which all congregations of the diocese may contribute vision
and ideas for the mission and ministry of the diocese and the implementation of the
decision-making process; and
BE IT FURTHER RESOLVED that the appointed committee, guided by the
results of this initiative, shall present to the annual convention of the diocese meeting in
November, 2009, a summary and evaluation of its experience with the process; if
appropriate recommend further actions to the convention; and propose such resolutions as
may be required to implement any proposals the committee offers.

Chowning worked hard on the commission, for his greatest desire was for the diocese to grow into a healthy healing place for all people, a place where there was room for love, grace, and courage as we sought to share the amazing message of God’s unceasing love for everyone.

He filled many leadership roles at All Saints’, but most people knew him as the smiling usher greeting everyone on Sunday morning.

He was funny, outspoken, and always straight forward. No one ever doubted where they stood with him. He had no hidden agendas. As his health began to deteriorate, his plainspokenness grew. He had no time to waste with beating around the bush, and so he would get straight to the point with whoever he was engaged.

Chowning’s humor, passion, intelligence, and vision will be missed.

Here is the obituary that ran in the Fort Worth Star-Telegram:

Richard Chowning left our earthly presence to join the Saints on July 10, 2020. He was a courageous gentle man dedicated to faith, family, friends, and community. Due to the current circumstances, a memorial service will be planned for a later date.

The family asks that friends consider memorials to All Saints’ Episcopal School, All Saints’ Episcopal Church, The Episcopal Diocese of Fort Worth care of The Rt. Rev. J. Scott Mayer, or a favorite charity. Richard had enormous gratitude for all his medical professionals and those who enable them to serve. He suggested that fitting memorials would be to carry forward loving kindness to those in peril today with special attention to medical and first responder personnel, those who work at all jobs to clean, feed, and give us security,  those who spiritually sustain us, those who cannot be with their loved ones during this time of trial, and all whose resources and humanity are marginalized.

Richard Wofford Chowning grew up in Fort Worth with parents, Mary Wofford and Joseph Chowning, sister Lynn and brother Joe. He attended Westcliff Elementary, McClain Junior High and Paschal High School where he graduated Class of 1962.  A naturally gifted athlete, Richard was a nationally competitive swimmer and diver. He attended the University of Texas at Austin on a diving scholarship. He was a member of the UT Letterman’s Club and Kappa Sigma Fraternity.  He received his business degree from the McCombs School of Business at UT. After graduating first in his Air Force flight school class, Captain Chowning volunteered for combat service in SE Asia spending years in active combat flying F 100’s.  His dedicated goal was always to protect and support those serving on the ground.  He carried the memory of those lost in his prayers. After return to the mainland, he did his graduate work in finance at Arizona State University while he taught flight training for the US Air Force at Williams Air Force Base in Arizona.

Upon return to Fort Worth, Richard was a career real estate broker and mediator. His clients valued his remarkable understanding of contracts and attention to detail. His loyalty was legendary. He was dedicated to serving others and was active in the fabric of Fort Worth with terms on numerous performing arts boards of directors and community agencies for those in need. He particularly felt drawn to work on the growth and development of his church, the Episcopal Diocese of Fort Worth, and All Saints’ Episcopal School. Although he received many medals and awards for service in the military and public arena, he was most deeply humbled by receiving the Saints’ Award and being named Trustee Emeritus of All Saints’ Episcopal School.  He led with a lion’s heart and a generous open belief in love and acceptance for all and he modeled that belief daily trusting that all have a place at the table.

Richard enjoyed spending time with his family and friends. They were privileged to enjoy his wit and wicked humor.  He relished travel, water sports, snow skiing, playing golf at Colonial, and in the last few years painting with the Horseshoe Trail Artists who inspired his creativity.

Richard is survived by his wife of 40 years, Barbara Evans Chowning, his daughters, Courtney Chowning Atkinson and Ashlye Stewart Harris (husband Robert), grandson Avery Chowning Atkinson, brother in law, David Fromme (wife Sheryl) and extended family including numerous nieces and cousins as well as his faithful and deeply treasured friends. He is forever our anchor man. We know his dedicated goal is still to protect and support those serving on the ground. We will miss his earthly presence but carry his beautiful spirit in our hearts. “The song of triumph has begun. Alleluia!”