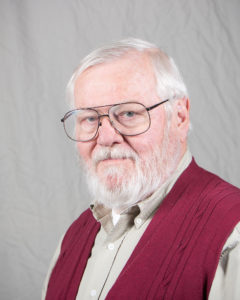 The memorial service will be at 2 pm Sunday, December 23, at the Episcopal Church of the Good Shepherd, 2016 Acton Hwy, Granbury, Texas (meeting at the Seventh Day Adventist Church). Bishop Scott Mayer and the Rev. Dr. Suzi Robertson will be presiding.

Snyder, his wife Barbara, and several other members of the Episcopal Church of the Good Shepherd, Granbury, were working at the Hood County Christmas for Children, an enormous undertaking that provides toys, bikes, beds, and all manner of other things for the children in need in Hood County. Norm was a mainstay of the event. On Wednesday, he died there, in the midst of the happy busy bustle of distribution day at the central headquarters for the group.

Watch a video of Norm Snyder talking about the event in 2014.

Snyder was born July 6, 1944. He is survived by his wife Barbara, son Chris Snyder and his wife Ann; daughter Kelly Elza and her husband John, and four grandchildren and three great grandchildren.

In lieu of flowers, the family has asked that remembrances be made to the Episcopal Church of the Good Shepherd’s Outreach Fund, for which Norm was currently serving as chair. Memorials can be mailed to:

Cards can be mailed to Norm’s wife at:

At the center of Norm’s heart was outreach.  He helped to found Hood County Christmas for Children, and was serving as vice president of its Board of Directors.

Synder was very active in the effort of many in the diocese to remain in The Episcopal Church in the time leading up to the departure of the bishop, many of the clergy, and lay leaders from the church. He also was active in the reorganization efforts immediately following the split and remained a key leader in the diocese.

He served on the Steering Committee, North Texas Episcopalians, the body that worked with the presiding bishop’s office in preparation for the February 7, 2009 Special Meeting of Convention and the election of the first provisional bishop, Edwin (Ted) Gulick.

Watch an 18-minute video in which Norm Snyder and others talk about the aftermath of the reorganization. Synder first appears at 1:26 and then in several other spots throughout the video.

Margaret Mieuli remembers Synder as a good team member in the work leading up to and after the former leadership left The Episcopal Church.

“He was able to clearly express his thoughts on any matter, even if they were different from the majority. He was intelligent, insightful, objective, and active,” she said.

Katie Sherrod said Snyder was someone to be counted on. “If he said he would do something, it would get done. He never flinched from speaking truth to power, but he was always courteous and on point”

Leslie Guinn wrote, “I have known Norm and Barb for about 20 years. Norm and I have worked together on vestry, the Steering Committee preparing for the split, Executive Council, and deanery. We spent many hours in the car together driving to meetings; discussing everything from politics to theology. He has been a part of my discernment process from the very beginning in 2010. I have greatly valued his support and encouragement. His loss is enormous to me personally, as it is to Good Shepherd and the entire community.”

Snyder was very involved in Habitat for Humanity, particularly so after a tornado tore through part of Hood County in May of 2013, damaging or completely destroying homes in the Rancho Brazos neighborhood. Sixty of the damaged or destroyed homes were built by Habitat for Humanity, an organization Good Shepherd has supported for many years. Snyder spearheaded the church’s involvement there and handled The Episcopal Church’s commitment to help to the Long-Term Recovery Committee, which included all the groups involved in the large-scale undertaking.

Read a story about the aftermath of the tornado.

The Episcopal Church of the Good Shepherd meets at the Seventh Day Adventist Church.