The Episcopal Diocese of Fort Worth met on Saturday, January 31, 2015, at St. Stephen’s Episcopal Church in Hurst. Among other business, the council heard about the Rt. Rev. Rayford B. High’s plans for town hall meetings in each deanery, heard updates on the Funding for the Future campaign and proposed revisions to the diocesan canons, acted on revisions to the 2014 and 2015 budgets, and organized into committees. 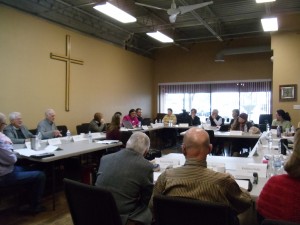 See more photos of the meeting in the diocesan Flickr gallery.

“We are doing good work for the Lord,” he said.

In 2015 he plans to have “town hall meetings” in each deanery, beginning on February 4 with the Northern Deanery in Wichita Falls. These meetings are open to all interested people.

Canon to the Ordinary Janet Waggoner reported on clergy transitions in the diocese:

Chancellor Kathleen Wells reported that the legal team is well prepared to argue the litigation in the 141st District Court, Tarrant County, on Neutral Principles. The team remains confident of prevailing. She also explained that arguing a case on Neutral Principles is very expensive, resulting in new ongoing litigation support costs.

The Rev. Curt Norman, president of the Standing Committee, was unable to attend because of illness, but his report was made available to council members. Among other items, he reported that “the Standing Committee is at the beginning stages of conversations with the Episcopal Diocese of Texas in regards to resolution passed at the diocesan convention for joint ministry initiatives. Items under discussion include but are not limited to: administrative functions, church insurance/pension, church planting, congregational development, clergy continuing education/clergy conference, leadership training for vestries, Standing Committee, Executive Council, et al.; educational opportunities through Iona School for Ministry, summer camps, renewal programs.” The first face-to-face meeting with the Diocese of Texas was on December 16, 2014, in Houston.

He also reported that the Standing Committee has begun conversations with Bishop Clayton Matthews in the presiding bishop’s office about “persons and models for provisional episcopacy following the end of Bishop High’s tenure in November 2015. While it is too early to comment on any of the options, the Standing Committee is quite pleased with the available options.”

Committee on Constitution and Canons

Mr. George Komechak reported that in response to the new Canon 42, Committee on Constitution and Canons, describing the organization and function of the committee that was passed at the 2014 Convention, committee appointments have now been made by Bishop High.

Funding for the Future Campaign Committee

Mr. Floyd McKneely, chair of the Funding for the Future Campaign Committee, reported that the campaign team has conducted a number of interviews and a focus group in each of the five deaneries. He also outlined the timeline for the campaign.

Ministry Support and Communications Officer Tracie Middleton presented the results of the evaluation forms filled out by those attending diocesan convention at the Jack Daniels’ Club at Globe Life Ballpark in Arlington.

Report from Host Deanery for 2015 Convention

Report of the Treasurer and Finance Committee

Diocesan treasurer Bob Hicks reported that all assessments are current and that in 2014 the diocesan vision was supported by diocesan dollars.

Hicks reported that all 2013 congregation audits were received and reminded the council that 2014 congregation audits are due by September 1, 2015. He said that the diocese has engaged the audit firm BDO USA, LLP.  The audit will begin the first week of May 2015 and be issued in approximately 45 days. Council also approved a motion to transfer funds from reserves to cover  some current litigation expenses.

Two resolutions proposed by the Finance Committee were passed by the council:

Hicks reminded council members that preparation for the 2016 budget process would begin in March.

Updates from the Deans

The Rev. Edwin Barnett, St. Andrew’s, Fort Worth, reported that the Fort Worth South Deanery will be working with on a Habitat for Humanity building project in September in the Como neighborhood of Fort Worth.

Ms. Jane Dennis, dean of the Southwestern Deanery, was not present, but Mr. Dave Shockley of the Episcopal Church of Hamilton County invited everyone to a Valentine’s Day event featuring two bluegrass groups. The event will begin at 2 pm and continue into the evening.

May 16: Executive Council, Location to be announced