The Rev. Corrie Cabes will join the staff of the Church of the Heavenly Rest in Abilene as assistant rector in October. 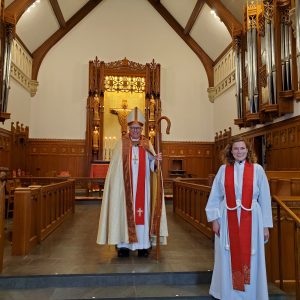 Cabes was sponsored for ordination by the Diocese of Fort Worth, and ordained to the priesthood on June 29, 2020, at All Saints’ Fort Worth.

She graduated from the Seminary of the Southwest (SSW) in May. While in seminary, she served as a member of the Jonathan Daniels Pilgrimage Task Force, a group committed to rediscovering and nurturing the Episcopal Church’s commitment to racial justice. Before attending SSW, Cabes served as a children and youth minister at St. Martin-in-the-Fields, Keller.

In the letter to the congregation announcing her new position, the Rev. David F. Romanik, rector of Heavenly Rest, said “Corrie brings a passion for Christian Formation and an enthusiasm for engaging with people of all ages to her work at Heavenly Rest.”

“In particular, she will provide guidance and spiritual leadership to our “Exploring Spiritual Treasure” newcomer welcoming program. More generally, Corrie will serve this parish as a pastor, priest, and teacher, helping us to continue nurturing our identity as a repository of grace and source of blessing and Abilene and beyond,” Romanik wrote.

“Those who had the opportunity to meet Corrie were impressed with her warmth, calming presence, and passionate commitment to the gospel of Jesus Christ. For her part, Corrie expressed deep appreciation for the hospitality she and her family received when they came to interview. When she officially accepted the position, she indicated that she was ‘feeling very blessed.’ I assured her that the feeling was mutual!”

Cabes is married to Richard, and they have two teenage children: Clay, who recently graduated from high school, and Olivia, who is in ninth grade.

The Cabes will be arriving in Abilene in the middle of October. Her first Sunday is scheduled to be October 18.