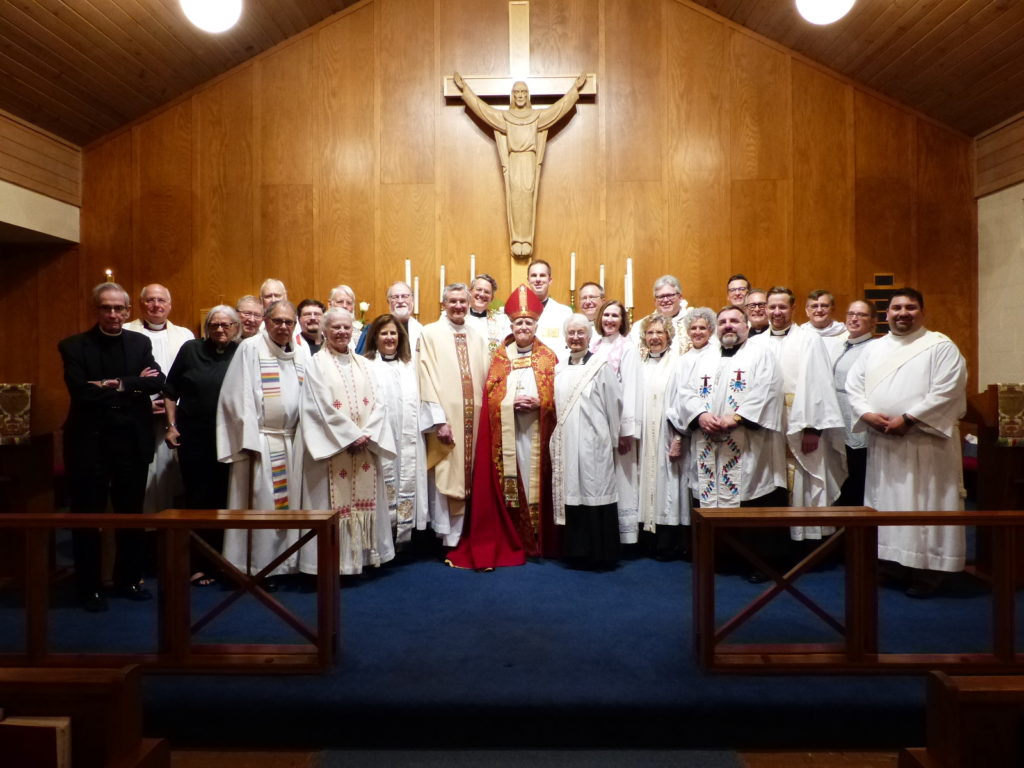 The Rt. Rev. Sam B. Hulsey ordained Christopher Thomas to the priesthood on May 17, 2018, at St. Eisabeth and Christ the King Episcopal Church. The Rev. John A. Logan, Jr. of the Diocese of Texas preached.

Thomas served as deacon at St. Alban’s, worshiping in Theatre Arlington before moving to St. Elisabeth and Christ the King. He is a cradle Episcopalian, having been raised at Trinity Episcopal Church in Morgan City, in the Diocese of Louisiana. He spent many years on the staff and as a member of Christ Church Cathedral, Houston. It was during his time in New York City, at Fifth Avenue Presbyterian Church, that he began the process of following the call to ordained ministry. He moved to North Texas in 2009, and completed and received the Master of Divinity from Brite Divinity School at Texas Christian University in 2011.
In 2011, Thomas joined St. Luke’s in the Meadow Episcopal Church and began the discernment process with the Diocese of Fort Worth. He is passionate about ministry in areas of urban development and social justice.

Listen to a podcast of the sermon.

Well, Christopher, the day is finally here.  At last it looks like it’s really going to happen.  Most of the people here tonight will not be aware that you and I go back a long time, most of which time was spent at Christ Church Cathedral in Houston when you were the Parish administrator and I was the sub-Dean.  And then, particularly after you moved to Ft. Worth, we were still able to continue to watch and wait for this day to finally come over the phone and computer.

Your many friends at the Cathedral send you greetings and best wishes on your Ordination and to the Priestly ministry which call you are answering tonight.  This occasion is so exciting that I am sure it has probably come to the attention of the occupant of Lambeth Palace in London.  The Archbishop would likely have joined us this evening were it not for another occasion this weekend that demands his attention.  At least, you will always be able to remember that your ordination as a Priest was two days before the royal wedding of Harry and Meghan.  And even though I don’t think they were invited, I’m sure they would also have sent their best wishes had they been.

We usually remember persons of some consequence by the events of their lifetime.  And yet all that the Bible tells us about Uzziah, King of Judah, is that he died.  “In the year that King Uzziah died.”  His death and the fact that he apparently kept the Temple well supplied with incense (“the house was filled with smoke”) are the sum total of his remembrance.

O yes, and that it was while he was still alive that a prophet named Isaiah just happened to stop by the Temple one day  — probably to see what the smoke was all about.  And what a surprise he got.   A voice he heard spoke words that still resonate.  In our time of great national security and unprectbility — cutting through the smoke and haze of uncertainty, Isaiah heard the the voice ask, “Whom shall I send, and who will go for me?”

In our day of hourly alarms and daily uncertainties this is still the question … just as it is the question asked of the church.  “Whom shall we send; who will go for us?”

This sometime means that the best clergy person is not the most obvious one for a given parish.  The one that everyone thought was right may instead really be right for some other congregation.  And the Priest, needs always to remember that he or she is not called to be a shepherd – the Priest is called to be a Good Shepherd.  There is a difference.

“The priest picks his way  Through the parish.  Eyes watch him From windows,…; Hearts wanting him to come near.”  Read more of what the Welch poet R. S. Thomas has to say about the nature of our calling.  “Priests have a long way to go, The people wait for them to come to them …”

And so, Christopher, we are finally coming to the  conclusion of a long snd sometimes painful but always exciting journey.  I leave you tonight with this blessing:

May the love of God draw you to him self;

May the power of God strengthen you in His service;

May the joy of God fill your heart; and

May the blessing of God, Father, Son, and Holy Spirit,

Be yours this day and remain with you always.