Carlye Hughes, rector of Trinity Episcopal Church, Fort Worth, was consecrated the 11th bishop of Newark and the 1,109th bishop in succession, at a joyous worship service at the New Jersey Performing Arts Center in Newark on Saturday, September 22, 2018. She was elected at a special convention of the Diocese of Newark on May 19, 2018.

Read the text of the sermon.

Several people from Fort Worth, including many from Trinity, traveled to Newark for the consecration and some took part in the service.  Hughes’ husband, David Smedley, was ill and unable to attend, but her sister, Robin Hughes, and her brother, Robert Hughes, Jr., were among her presenters, as was Victor Mashburn, a member of Trinity.  Janet Waggoner, Fort Worth’s canon to the ordinary, and Katie Sherrod, diocesan director of communication, presented the pectoral cross, a gift from the Standing Committee, Diocese of Fort Worth; and Christa McClary presented the crozier, a gift from Trinity, Fort Worth.

The pectoral cross was custom made by artist Gwen Meharg of Trinity. These photos of the cross are by Cynthia Black of Morristown, NJ.

Her stunning chasuble and stole were gifts from the community of deacons, Diocese of Newark; the matching cope and mitre were from The Oasis of the Diocese of Newark, and all were made by Colleen Hintz of Fruit of the Vine Vestments. Hintz also made a tie in the same pattern and fabric for Smedley.

Ellen Holland from Trinity read the passage from Ruth, and Sharon Nelson and Mark McClary from Trinity served as vergers. Prior to the service, Debora Clark, Trinity’s director of music, greeted the 300-member choir that had been assembled from choirs across the diocese of Newark, and thanked them for their hard work and the beautiful music they were providing. She was greeted with applause when she was introduced as having worked with Hughes  at Trinity.

The choir and small orchestra provided music prior to the service, during which liturgical dancers performed. When Hughes entered the back of the auditorium to be led to her seat by a verger, cheers began to ripple through the crowd as people realized she was there. Applause joined the cheers as the assembled people rose to their feet in a spontaneous outbreak of pure joy. She walked to her seat accompanied by a greeting worthy of a rock star.

The set the tone for the entire service. It was a historic moment, as the first woman and first African American elected bishop of Newark was consecrated.

And the people said, “Amen!” 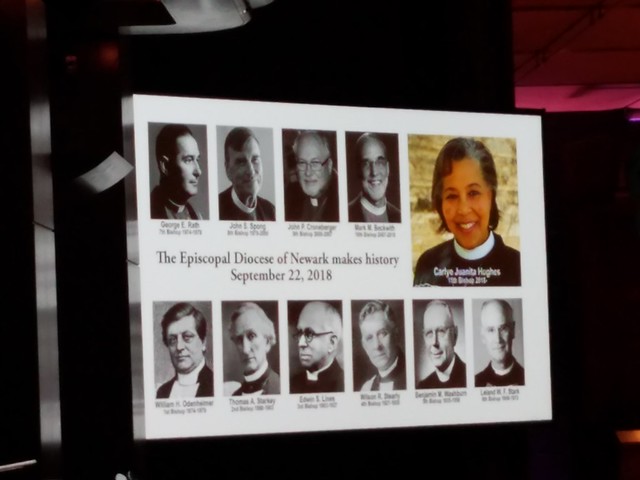