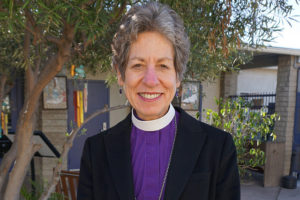 Former Presiding Bishop Katharine Jefferts Schori, who played a key role in the continuation of this diocese, will celebrate and preach at a Eucharist at 6:15 pm Wednesday, March 20, 2019, at St. Christopher Episcopal Church, Fort Worth. This will be followed by a soup supper. A discussion and Q&A during supper will be on “Spirituality Out in Public.” All are welcome to the worship service and soup supper, but reservations for the supper are required so St. Christopher can prepare adequately. Note: Reservations for this event are closed.

On Thursday, March 21, Jefferts Schori will have breakfast with the clergy of the diocese, also at St. Christopher. The discussion topic for breakfast is, “What is the Spirit creating – Possibilities in a small diocese from the perspective of someone who has led one.” This event is solely for diocesan clergy, who should RSVP with diocesan Administrative Assistant Michele King at michele.king@edotn.org.

Bishop Scott Mayer will be unable to attend, as he was already committed to a meeting in Chicago of the General Convention’s Task Force to Study Sexism in The Episcopal Church and Develop Anti-Sexism Training, of which he is co-chair. But he welcomed Jefferts Schori into the diocese, saying, “I am sorry to miss this, but I know people here have a great deal of affection and respect for Bishop Katharine, as do I. I am grateful they will have this opportunity to spend time with her.”

On November 15, 2008, then Fort Worth Bishop Jack Iker led a diocesan Convention at which a majority of delegates voted to leave The Episcopal Church and align with the Anglican Province of the Southern Cone. As the canons require when a bishop announces he has left The Episcopal Church, on November 21, 2008,  Jefferts Schori inhibited Iker from performing sacramental acts and gave him 60 days to change his mind.

Almost immediately, Iker posted a notice on the Internet announcing that the presiding bishop has no authority over him because he is a bishop in another church. On December 5, 2008, the presiding bishop accepted that as notice of his renunciation of orders in The Episcopal Church. On December 15, 2008, Jefferts Schori wrote to the members of the Standing Committee, all of whom also had left The Episcopal Church, that she no longer recognized them as the Standing Committee of the Episcopal Diocese of Fort Worth.

Then, because there was no bishop or Standing Committee, and pursuant to The Episcopal Church’s Constitution and Canons, in her role as presiding bishop, she called for a Special Meeting of Convention for the continuation of the diocese to take place on Saturday, February 7, 2009. That morning she celebrated and preached at All Saints’, Fort Worth, then after lunch came to Trinity, Fort Worth, for the convention. There she called the convention into order and presided until delegates elected the Rt. Rev. Edwin (Ted) Gulick of the Diocese of Kentucky as the first provisional bishop.

Once elected and installed, Gulick took over the chair, and delegates went to work electing a Standing Committee and deputies to General Convention, and approving the bishop’s appointments to other diocesan bodies.

That evening, a reception for the presiding bishop was held at St. Christopher. Prior to the reception, Jefferts Schori toured the preschool, and then blessed the brand new Family Life Center and kitchen. The next morning, she celebrated and preached at St. Stephen’s, Hurst, meeting in a woman’s club. The continuing Episcopal Diocese of Fort Worth remained alive and well and open for business.

Jefferts Schori most has recently been serving as assisting bishop in the Episcopal Diocese of San Diego, a position she took on in August 2017 as the diocese conducted a search for its 10th bishop. On February 4, 2019, the diocese elected their first female bishop, the Rev. Canon Susan Brown Snook. Assuming the required consents are received, Snook will be consecrated on Saturday, June 15, 2019, at St. Paul’s Cathedral in Banker’s Hill. Jefferts Schori will be the chief consecrator.

Jefferts Schori earned a biology degree from Stanford in 1974, followed by a master’s in oceanography in 1977, and a doctorate, also in oceanography in 1983 from Oregon State University. In 1994 she earned a master’s in divinity from Church Divinity School of the Pacific. She is married to Richard Schori, a retired topology professor. Their daughter, Katharine, served ten years in the US Air Force; she separated as a major. Bishop Jefferts Schori is an instrument-rated pilot and is fluent in Spanish and French.