Bishop Rayford B.High, Jr. visited St. Martin-in-the-Fields, Keller, on Sunday, April 2, 2017, for confirmations, receptions, and reaffirmations of faith. Bishop High stepped in for Bishop Scott Mayer, who was away for a family funeral. 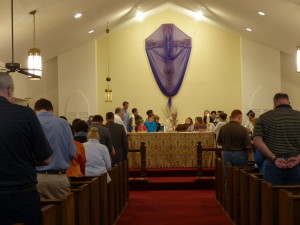 As it was the first Sunday of the month, it was the children’s service, in which children do the readings and gather around the altar during the Eucharist. Before the sermon, Bishop High showed his bishop’s “gear” to the children assembled on the floor before the altar rail. He explained about his cope, his miter, his ring, and his crozier. As they tried on his miter, he told them he also has another hat he wears, and produced his signature white cowboy hat.Then he demonstrated why the crozier is shaped like a shepherd’s crook — he reached out and gently looped it around a child’s neck, eliciting much laughter, and much urging to “Do it to him!” “Hook it on her!”  They also tried on his ring and the cowboy hat.

Then they wanted to know about his shoes.

“I don’t wear shoes,” Bishop High said, to the astonishment of several of the kids, who instantly checked out his feet. The toes of some kind of footwear were clearly peeking out from under his vestments.

As mouths opened to challenge his assertion of  not wearing shoes, the bishop said, “I wear boots,” and showed his cowboy boots off to uniform admiration. “These are my going-to-church boots,” he said, to approving nods all ’round.

Then the children went back to their seats, and the bishop gave his sermon. Watch it below or on YouTube.

Watch a short video of the service below or on YouTube.

Watch as Bishop High shows his “gear” to the children.

Previous
St. Stephen's hosts "What I wish you knew about…
Next
Presiding Bishop Michael Curry to visit diocese…