The Episcopal Church is distinguished by worship that is rooted in tradition but not bound by it. Our ancient faith, our being a part of the “one holy, catholic and apostolic church,” and our ties to the historic See of Canterbury ground our worship in an intellectually robust faith tradition that is both broad and deep.

Let’s unpack that a bit.

There is a wide range of different peoples and cultures, in communities large and small, in the 24 counties of Texas that make up the Episcopal Diocese of Fort Worth. This diversity is reflected in the membership of our churches and in the varied ways members worship each Sunday and on special occasions throughout the year.

Sunday is traditionally when Episcopalians gather for worship. The principal weekly worship service is the Holy Eucharist, also known as: the Lord’s Supper, Holy Communion, or Mass. In most Episcopal churches, worship is accompanied by the singing of hymns, and in some churches, much of the service is sung.

Episcopalians worship in many different styles, ranging from very formal, ancient, and multi-sensory rites with lots of singing, music, fancy clothes (called vestments), and incense, to informal services with contemporary music. Yet all worship in the Episcopal Church is essentially the same, and has its roots in the prayers of the earliest Christians. The Sunday service described in the Acts of the Apostles has continued among many different Christian traditions, including our own. The particular words and prayers used in our church are set down in The Book of Common Prayer.

Worship in the Episcopal Church is said to be “liturgical,” meaning that the congregation follows service forms and prays from texts that don’t change greatly from week to week during a season of the year. This sameness from week to week gives worship a rhythm that becomes comforting and familiar to the worshipers.

For the first-time visitor, liturgy may be exhilarating… or confusing. Services may involve standing, sitting, kneeling, sung or spoken responses, and other participatory elements that may provide a challenge for the first-time visitor. However, liturgical worship can be compared with a dance: once you learn the steps, you come to appreciate the rhythm, and it becomes satisfying to dance, again and again, as the music changes.

The Liturgy of the Word

In spite of the diversity of worship styles in the Episcopal Church, Holy Eucharist always has the same components and the same shape. 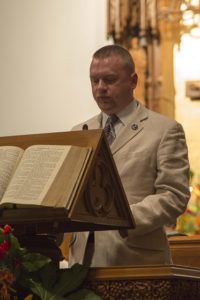 We begin by praising God through song and prayer, and then listen to as many as four readings from the Bible. We read through the Bible using a system called a lectionary. Usually one from the Old Testament, a Psalm, something from the Epistles, and (always) a reading from the Gospels, often read in the middle of the congregation. The psalm is usually sung or recited by the congregation.

Next, a sermon interpreting the readings appointed for the day is preached.

The congregation then recites the Nicene Creed, written in the fourth century and the Church’s statement of what we trust in.

Next, the congregation prays together—for the Church, the world, and those in need. We pray for the sick, thank God for all the good things in our lives, and finally, we pray for the dead. The presider (e.g. priest, bishop, lay minister) concludes with a prayer that gathers the petitions into a communal offering of intercession.

In certain seasons of the Church year, the congregation formally confesses their sins before God and one another. This is a corporate statement of what we have done and what we have left undone, followed by a pronouncement of absolution. In pronouncing absolution, the presider assures the congregation that God is always ready to forgive our sins.

The congregation then greets one another with a sign of peace.

The Liturgy of the Table

The priest stands at the altar, which has been set with a cup of wine and a plate of bread, raises his or her hands, and greets the congregation again, saying “The Lord be With You.” Now begins the Eucharistic Prayer, in which we hear the story of our faith, from the beginning of Creation, through the choosing of Israel to be God’s people, through our continual turning away from God, and God’s calling us to return. Finally, the presider tells the story of the coming of Jesus Christ, and about the night before his death, on which he instituted the Eucharistic meal (communion) as a continual remembrance of him.

We then share the consecrated bread and the wine. Sometimes people all come forward to receive the bread and wine; sometimes they pass the elements around in other ways. 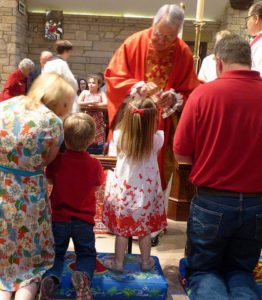 Visitors who are not baptized Christians are welcome to come forward during the Communion to receive a blessing from the presider.

At the end of the Eucharist, the congregation prays once more in thanksgiving, and then is dismissed to continue the life of service to God and to the world.