Bishops are central to the life, worship, and ministry of The Episcopal Church. The word “episcopal” means “of a bishop or bishops” or “governed by or having bishops.” Bishops in The Episcopal Church are elected by the people of the area (diocese) she or he will be leading and consented to by a majority of the bishops and leaders of the 111 dioceses in the Church. Bishops carry a shepherd’s curved staff (crosier) as a symbol of the role they fill as shepherd to a flock. They are called to lead, inspire, teach, and care for the people of a diocese. Our diocese has three bishops – the diocesan or main bishop, and two retired bishops who assist him.

He succeeds the Rt. Rev. Rayford B. High, Jr. Mayer continues as bishop of the Episcopal Diocese of Northwest Texas while also serving as provisional bishop of Fort Worth. He splits his time between the two dioceses. 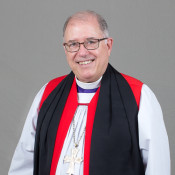 Download a coloring and activity book for children to learn about the bishop, our diocese, and our church. 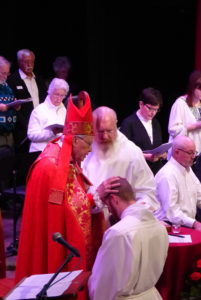 Assisting Bishop Rayford B. High, Jr. served as provisional bishop of The Episcopal Church of North Texas from November 2012 to June 2015. Prior to that, he served as bishop suffragan of the Diocese of Texas from 2003-Spring 2012. He was canon for pastoral ministries and the diocesan liaison to St. Luke’s Episcopal Hospital when he was elected bishop suffragan. As bishop suffragan, he oversaw congregations in the Northeast, San Jacinto and Southeast Convocations. Prior to becoming Canon for Pastoral Ministries, Bishop High served in parish ministry for 32 years, most recently as rector of St. Paul’s, Waco.

A native of Houston, Bishop High graduated from Bellaire High School; University of the South in Sewanee, Tennessee, and Episcopal Theological School in Cambridge, Massachusetts. He was elected to represent the diocese as a deputy at General Convention on eight occasions and was named Waco humanitarian of the year. Bishop High’s wife of fifty years, Pat, died  in 2015. They have three children and six grandchildren.

Bishop High enjoys his work with our people and our churches! If you’d like to view photos of Bishop High around the diocese, click here. 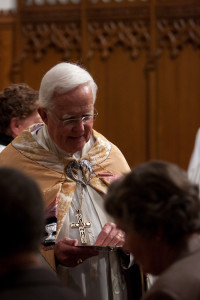 Until his death on August 6, 2020,  Bishop Sam B. Hulsey was an assisting bishop in our diocese. Hulsey had a long and distinguished career in The Episcopal Church, which culminated in his tenure as bishop of the Diocese of Northwest Texas from 1980-1997.