The Rev. Jordan Haynie Ware, Director of Youth and Young Adult Ministries at All Saints’ Episcopal Church, Fort Worth, has written a book that will be out in February, 2017. The book is available for pre-order now. 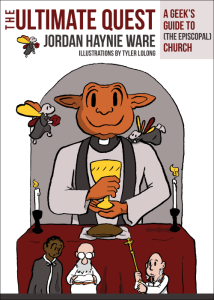 Church Publishing describes The Ultimate Quest, A Geek’s Guide to (The Episcopal) Church as “a thorough introduction to the Episcopal Church (vocabulary, theology, practice) for youth, young adults, seekers, geeks” and ” a humorous translation of Episcopal practices into geek lingo.”

“This tongue-in-cheek introduction by Episcopal priest and certified geek J. M. H. Ware uses an “it’s geek to me” approach to translate Episcopal theological concepts and rich church traditions into geek language, accompanied by comics that help the reader maneuver through the oft-dense liturgical and theological workings of the Christian tradition.

Interview with the author

Why did you write it?

I’m a big geek and gamer, and I realized pretty early on that geek worlds use a lot of church words. In tabletop role-playing games, for example, someone might cast the spell “Magic Vestment.” Seeing the connections between the two was really fun. Then, one of the guys I game with gave me Confessions of a Part-Time Sorceress, a book that tries to show women all the connections between stereotypically “girly” things and Dungeons & Dragons. It hit me: I could do this for church. I could show geeks, who are building communities around stories and worlds that move them, the incredible community of the Church, and the world redeemed by Jesus Christ.

What is your target audience?

I really hope to be able to reach geek fandoms – cosplayers, Con-goers, etc. If you’ve got a uniform that belongs on the Enterprise in your closet, if you can speak Dothraki, if you’ve been Sorted into a Hogwarts House of your very own, this book is for you. My goal is to show that church isn’t nearly so scary (or foreign) as many people think it is, and to explain some of the outlandish things Episcopalians do to newcomers.

What did you learn while working on it?

Writing a book requires more research than I thought it would! I make reference to 44 pop culture icons in it, plus several theological works that make similar points about God as, say, Tolkien does about Gandalf. I put in a lot of hours re-watching movies and shows, re-reading books, and checking fansites to make sure I wasn’t totally off-base in my interpretations. Of course there will still be some who disagree! Geeks are nothing if not contrarian. But I had a lot of fun remembering why I love these stories as I re-encountered them.

What do you hope your readers learn?

I hope that geeks learn about the incredible community that is The Episcopal Church, and start to think that there might be room for them here. We need all hands in this questing party as we join Jesus Christ in the fight against the Sin-beast. And I hope that Episcopalians learn that geeks aren’t weirdos living in their mom’s basements. We are men and women, single and married, of all races and ages, and we want to be part of communities that accept us for who we are. The Episcopal Church can be that place, with just a little help introducing the geek lingo. 🙂

What’s your next project?

Right now, I’m working on “Two Feminists Annotate the Bible,” a podcast with Luci Hoad, a laywoman in the diocese. It’s a feminist podcast for Bible enthusiasts. We’re journeying through the Bible, story by story, starting in Genesis and (hopefully!) going all the way to Revelation. You can find us on iTunes or at twofeministsblog.com.

I haven’t started my next book yet, but I’m thinking about something relating to the theology and iconography of Buffy the Vampire Slayer. There’s so much there!